Have you ever been told not to mix red wine and white wine in the same glass? Perhaps the first thing that comes to your mind is that ‘winemakers can blend different wines together, so why can’t I? The truth is, you’re not alone.

In this article, we’ll tell you everything you need to know about mixing red wine and white wine.

As with other alcoholic beverages, drinking wine in moderate amounts is deemed ideal. That’s why wine glasses have marks- to stop you from drinking straight from the bottle and end up drinking all the wine. Obviously, wine served in a glass doesn’t give an opportunity for that. The standard pour of wine falls somewhere around 5-6 oz. mark. This controlled volume of drinking wine is one rule that doesn’t exist officially, but most people generally accept and obey. Besides this, another unwritten rule is just as important- never mix white wine and red wine in one glass.

You’ve heard it right- mixing two types of wine in one glass is definitely a no, no. Although this rule has no medical backing to it, mixing white wine and red wine has long been forbidden in a social and cultural setting.

Mixing red and white wine should not be considered a defiant approach toward the wine’s quality and value. On the other hand, the act of mixing wine is not a new practice. Professional tasters and distillers have been mixing wines since the dawn of times to create interesting wine blends.

In fact, many interesting wines on the market results from mixing wines- more often called ‘blending’. A wine blend could either mean a determined wine has been mixed with another wine or the wine is made from various grapes. Either way, the result is often a more consistent, higher quality wine.

The concern over the possibility that it could lower the wine’s quality is accurate, however, only when it’s done incorrectly. For instance, if you mix a sweet red and a dry wine in a glass, the white wine will dilute the red wine’s taste and possibly make it drier.

This is because the higher concentrations of tannins and aromatic compounds in red wine make it prevail over the white. But this isn’t necessarily the case with aged Chardonnay, which usually prevails over a very young red wine.

Medically speaking, there is no evidence to prove that one’s health could be harmed by mixing red and white wine. The common belief that a person may experience severe stomach upsets, headache, strong hangover and other discomforts is only a myth.

A lot of people believe that an intense hangover is one consequence that will ideally emerge from mixing red wine and white wine. But then again, there is no proof whatsoever that the mixture results in a sure-fire hangover in the morning. The only thing that will undoubtedly give you a hangover is drinking excessive amounts of the mixture or drinking excessive amounts of one type of wine.

What Professionals Have To Say?

According to professionals, the only disadvantages are missing the diluting tastes’ effect and missing out on the individual flavors . Some Rosé wine variations can be achieved by mixing red and white wine, and the result is always a delicious wine. Indeed, it’s possible to mix red and white wine and new exquisite and tasteful blends.

It should, however, be done in a way that doesn’t compromise the wine’s quality. Ideally, while it may be considered wrong to mix wines in a social and cultural setting, a blush wine or a blend of Rosé can be arrived at using the proper approaches to mixing. It’s essential to bear in mind that the high concentration of tannins and aromatic compounds make red wines more acidic. Hence, mixing red wine with white wine will result in very few changes.

Nevertheless, the wine’s age may play a key role in granting superiority in terms of red or white wine’s concentration. For example, red wine often prevails when it comes to flavor and color. But as mentioned, a well-aged Chardonnay will easily dominate over a very young red wine.

So, what makes people believe that mixing red and white wine at home, directly in the glass, is not a good thing?

In general, wines go bad when not stored properly. While wines that have gone bad won’t harm you, but you will have to deal with the unpleasant taste. But what if an expensive Barbarossa has gone bad because of storage issues? Will you just throw away that bottle of wine? Of course not! You’ll try your best to salvage that expensive wine and your few hundred dollars.

One effective way to improve its taste is to mix it with an inexpensive yet younger wine, such as Nebbiolo. At the same time, you can reassume that mixing red and white wine is ideal for reviving a wine that has gone bad by restoring the tannic and acidic concentration’s balance.

Besides the myth that you can’t mix red and white wine, there is another popular myth- you can’t serve red wine after white wine or vice versa.

It’s general knowledge that the food and wine pairing work because it enhances the flavor of both the food and the beverage. So, what if one of your dishes pairs well with white wine and another one with red wine? Should you just forget the wines and go for juice?

The ideal option is not to play safe because you can have both red and white wines whenever necessary and whenever you want. Those who tell you that you can’t serve red wine after white wine or vice versa are uninformed about the importance of pairing wine with food.

You don’t have to be a medical expert to know that drinking red wine after white wine will not make you sick. It has never been proven that drinking wine in a specific order is likely to be wrong. After all, no substances come into conflict when you drink one type of wine after the other. And if you’re still not convinced, just think of the professional wine tasters who drink all sorts of styles and varieties in a day!

If you want to mix red and white wine, there’s no reason not to do so. Similarly, if you want to serve red wine after white wine or vice versa, there’s no reason not to do so. Ideally, you can indulge in drinking your favorite wine every once in a while as long as you consume it in the right amounts. Getting wasted every night might not benefit your physical and mental well-being, but moderate wine consumption may have some substantial health benefits. 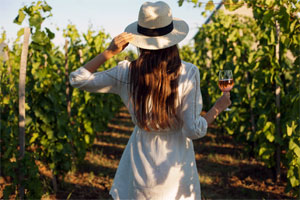 Thats me in my element! I love wine and all things about wine. MY favorite weekend getaway is to go to a winery or go on wine tasting tours. On this website I share everything that I have learnt over the years as a wine connoisseur.