If there’s one time of the year where you’re most likely to deal with a bottle or two of unfinished wine, it is during Christmas parties and New Year’s Eve dinners. The holidays are just a few weeks away, so we’ll teach you how to make the most of those half-finished wine bottles on the counter. Besides putting a cork back, we have five more methods to recorking a wine bottle.

How to Recork a Wine Bottle – Best Methods for Recorking

After opening a bottle, the wine begins to oxidize as it comes in contact with air. However, when exposed to air for too long, the wine’s flavor deteriorates. This is due to a bacteria in the air called acetobacter. While this bacteria is harmless to ingest, it can turn the wine into acetic acid. So if you don’t want your unfinished wine to produce that distinct taste so soon, learn how to slow down the aging process through recorking.

1. Push the Cork Back In

If you still have the undamaged, original cork in hand, you can always force it back into the bottle. However, it can also expand so much that it never seems to fit around. To prevent this from happening, make it a habit to place your cork in the fridge right after you’ve opened the bottle. This way, you’ll be less likely to lose it. What’s more, you’re contracting the cork so that it’s not hard to push it back into the bottle once there are leftovers.

Below is a step-by-step guide for pushing a cork back in:

Using the original cork is the easiest method to recorking your wine; however, there can be times when the cork gets damaged during the opening. To resolve this, follow the alternative methods.

2. Wrap the Cork’s Underside with a Waxed Paper

The reason why you can’t get an original cork to slide back into the bottle is friction. When there is too much friction between the glass bottle and the surface of the cork, there’s no way you’ll succeed. To reduce the friction:

If you have no replacement corks at home, you can explore the creative method of recorking. Using a paper towel, tape, and plastic wrap, make your DIY cork.

Prepare a piece of paper towel and fold it 2 inches wide. Next, roll the folded paper towel tightly on itself and form a cork. The size should be just a little bigger than the bottle’s opening. Once you have formed a cork, secure the paper towel’s end with tape and wrap the cork with a plastic wrap. Once the DIY cork is finished, push and twist it until the bottle is fully sealed.

Though effective, this method is only temporary. Ideally, a DIY cork can only keep the wine fresh for a while, so replace it after two days.

Various wine stoppers are widely available in the market. Some are made from metal with rubber, while some are silicon and rubber variants. Wine stoppers that use rubber on the top area are great because rubber is flexible. As you put the stopper in the wine, the rubber helps fold down. Also, wine stoppers are extremely easy to find, affordable, and re-usable. For a one-time purchase that ensures a tight fit, every penny you spend is surely worth it. 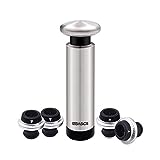 Alternatively, you can make your own wine stopper using aluminum foil and plastic wrap. Wrap the opening of the bottle with these materials. If you want to make sure that the seal is air-tight, wrap a rubber band around the top of the bottle.

A used cork from an older bottle is also a great alternative. You’ve probably never considered your old cork that has been lying around to fit your wine bottle. The expansion of a cork is primarily caused by moisture, but over time, moisture is lost. This means that the old cork may have regained its previous size, making it suitable for recorking your unfinished bottle of wine.

You can also consider purchasing a wine vacuum if your goal is to store your unfinished wine for as long as possible. Wine vacuums keep the air out and take the oxygen out of the bottle with ease. By taking as much air out of the bottle, your wine may last as long as fourteen days.

Now that we’ve covered the methods to preserve your wine after the party, there’s no way you’ll be wasting even a drop of wine. Yet, parties and celebratory dinners can be exhausting, and there’s a chance you’ll forget to recork your half-finished wine right away. In these situations, smell if the wine has gone bad before you try to salvage it.